Creation of Victor entries for the Discography of American Historical Recordings

The Discography of American Historical Recordings (DAHR) documents recordings created in the first half of the 20th century by a number of American record companies. The Victor section of discography, formerly the Encyclopedic Discography of Victor Recordings (EDVR), has provided the structural and procedural foundations of the DAHR. The underlying database structure of the DAHR is identical to that used for the EDVR, and the procedures developed to document Victor recordings have guided the development of the DAHR as it has been expanded to include other record companies. However, the Victor section of the DAHR benefits uniquely from the access ADP editors have to primary sources that have not been available to them for other record companies represented in the discography. This overview of some of the editors’ procedures describes some of the resources that are unique to the creation of the Victor recordings segment section of the DAHR.

The EDVR project at the University of California Santa Barbara has continued the work begun by Ted Fagan and William Moran in the early 1960s. Fagan and Moran's data, earlier keyed into an Oracle database, was converted to FilemakerPro by UCSB in 2004. Fagan and Moran's original manuscripts are still used by ADP editors to verify discography entries, often referenced in the DAHR as "legacy data." 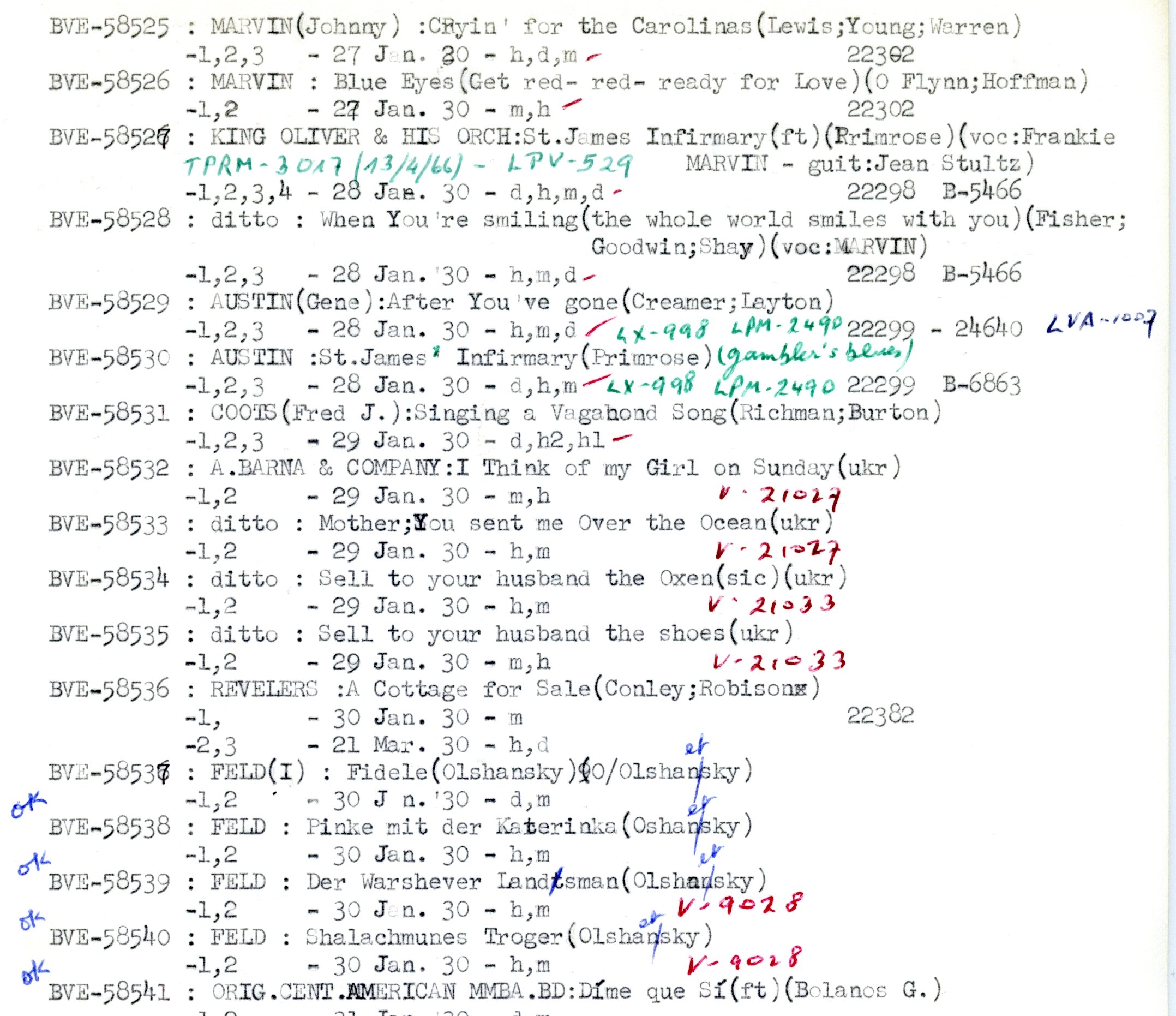 Excerpt from Fagan and Moran manuscript. William Moran's emendations to Ted Fagan's typewritten manuscript are evident here, as they are on nearly every page of the original EDVR manuscript. Moran has verified entries and added issue numbers for 78s and LP reissues. Fagan and Moran intended their work to reach the public on the printed page. As a result, the length of their entries for each master recorded by Victor was kept to a minimum of characters, enlisting many abbreviations (e.g., in the example above, "O" for “with orchestra,” and "ukr" as an indication that a recording is by a Ukrainian ensemble) and the use of last names only whenever possible. The DAHR, designed as a website, is not subject to these restrictions.

Fagan and Moran's accomplishments were monumental—documentation of more than 175,000 Victor master recordings. But at the time of their deaths their work was incomplete. Published print volumes took Victor recordings only through the first 11,500 master numbers. The remainder of the entries was unpublished and often incomplete. As ADP editors prepared documentation of these masters for the web, they found that the work would benefit significantly from reexamination of the original Victor documentation consulted by Ted Fagan. Sony Music Entertainment’s archives generously provided access to primary source materials in its care, including allowing UCSB to digitally scan original Victor ledgers and a microfilm copy of Victor "blue history cards."

Both resources have proved to be indispensible to the DAHR. The ledgers, or "recording books," maintained by the Victor company document nearly every recording session undertaken by Victor in the United States, as well as some from early recording field trips made by Victor employees. They outline the disposition of every take recorded and provide many details about participants not found on disc labels. 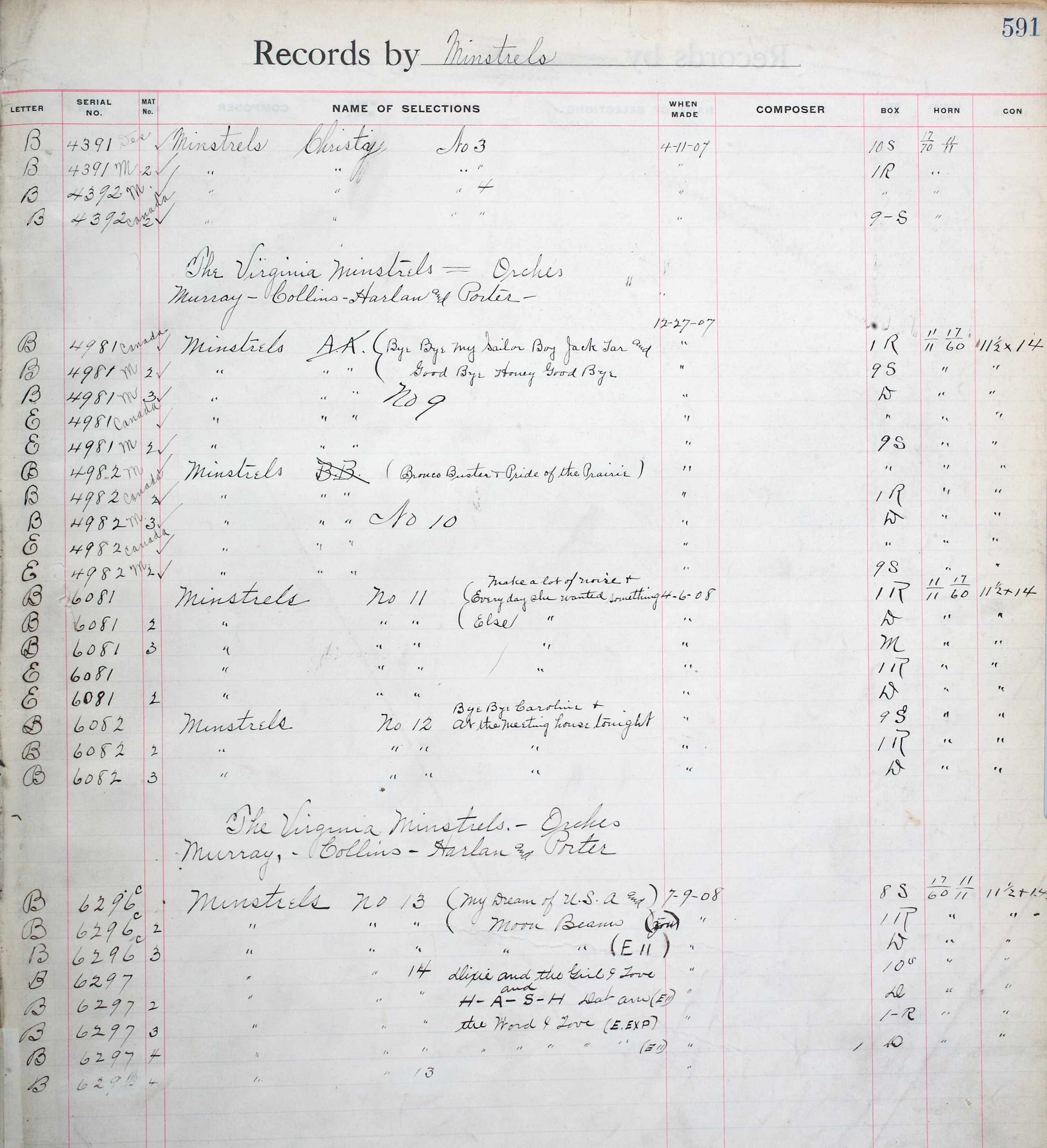 Victor ledgers listing of minstrel recordings, 1907-1908. From a Victor ledgers page—such as the one excerpted here—ADP editors learn the names of the "Virginia Minstrels" (who were billed on record labels as the "Victor Minstrels") and the ultimate dispositions of each take made by the group. It appears that several of the masters were shipped to Canada for release there. Image courtesy of Sony Music Entertainment Archives. 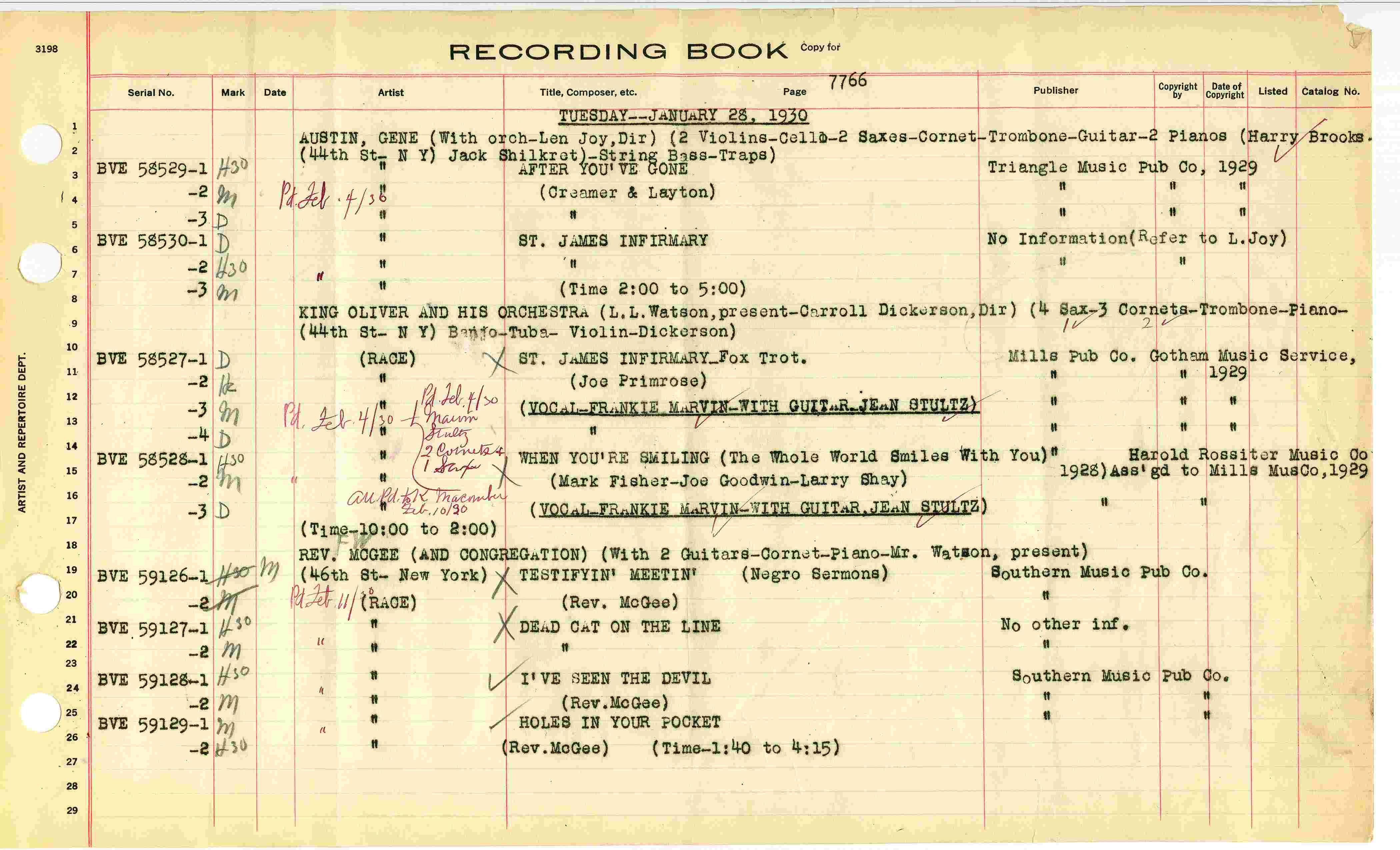 Victor ledgers page of Jan. 28, 1930. Through access to this document, ADP editors have been able to include in the discography the name of the director of the session, King Oliver, who led the band, and the name of the guitar soloist. The page is also a good illustration of a documentation issue emphasized in the Instrumentation [ßlink to glossary page entry] entry of the DAHR glossary. Listening to King Oliver's recording of "St. James Infirmary," it is very evident that the arrangement includes a clarinet, chimes, and possibly a bass clarinet. Yet none are listed on this ledgers page. As pointed out in the glossary entry, instrumentation found in Victor ledgers is more likely to include the number of people and types of players participating in a recording than the actual instruments heard.

The set of Victor ledgers at the Sony Music Entertainment archives that are arranged by recording date cover the company's activities only to the end of 1935. ADP editors have the benefit of also consulting a scanned copy of a microfilm set of post-1935 Victor ledgers that belonged to EDVR editor Ted Fagan. In addition, the Institute of the American Musical in Los Angeles has contributed to the DAHR by enabling UCSB to scan motion picture soundtrack and other Victor ledgers in the collections of the Institute. Image courtesy of Sony Music Entertainment Archives. 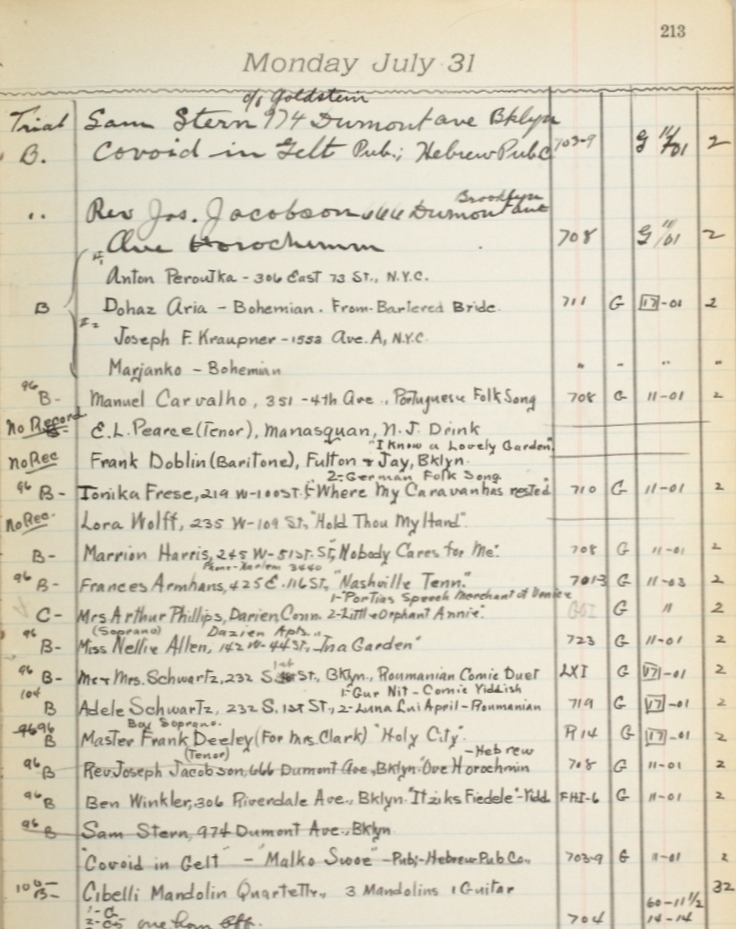 "Trials" book, January 31, 1930. Included among the original Victor documents preserved at Sony Music Entertainment archives is a book that lists "trial" (audition) recordings from 1917. Through resources such as this, the DAHR can provide information about recording artists that may be available nowhere else. One such example, minor but interesting nonetheless, is the location of the 1917 residence of vocalist Marion Harris (245 W. 51st St., New York City—a building still standing), as well as her phone number at the time (Harlem 3440). Image courtesy of Sony Music Entertainment Archives.

The Victor Talking Machine Company and RCA Victor Records created 3-in. by 5-in. cards documenting almost every disc side the company issued. They are held in the archives of Sony Music Entertainment in New York City.

Information included on “blue history cards,” as they are called, includes the matrix number and take—or takes—that have contributed to nearly every side issued by the company. (A few blue history cards appear to be lost, probably misfiled sometime over the 115 years the system has been in place—surprisingly few given the number of cards and that length of time.) The cards may also note when a take master was sent to the laboratory for plating and reproduction; when a substitute take was used for an issue; when a recording was made, and issued; and the creators and copyright holder of the work performed. Sample disc labels may often be found glued to the backs of blue history cards.

The potential cost of individually scanning the huge number of cards in the Sony archives has prevented day-to-day access by ADP editors to all of the information on the cards. However, the Sony archives include a 16mm microfilm copy of many of the cards and the corporation has allowed UCSB to scan the microfilm reels. The card images, while sometimes difficult or impossible to read, have been invaluable to ADP editors building the Victor discography. Image courtesy of Sony Music Entertainment Archives. 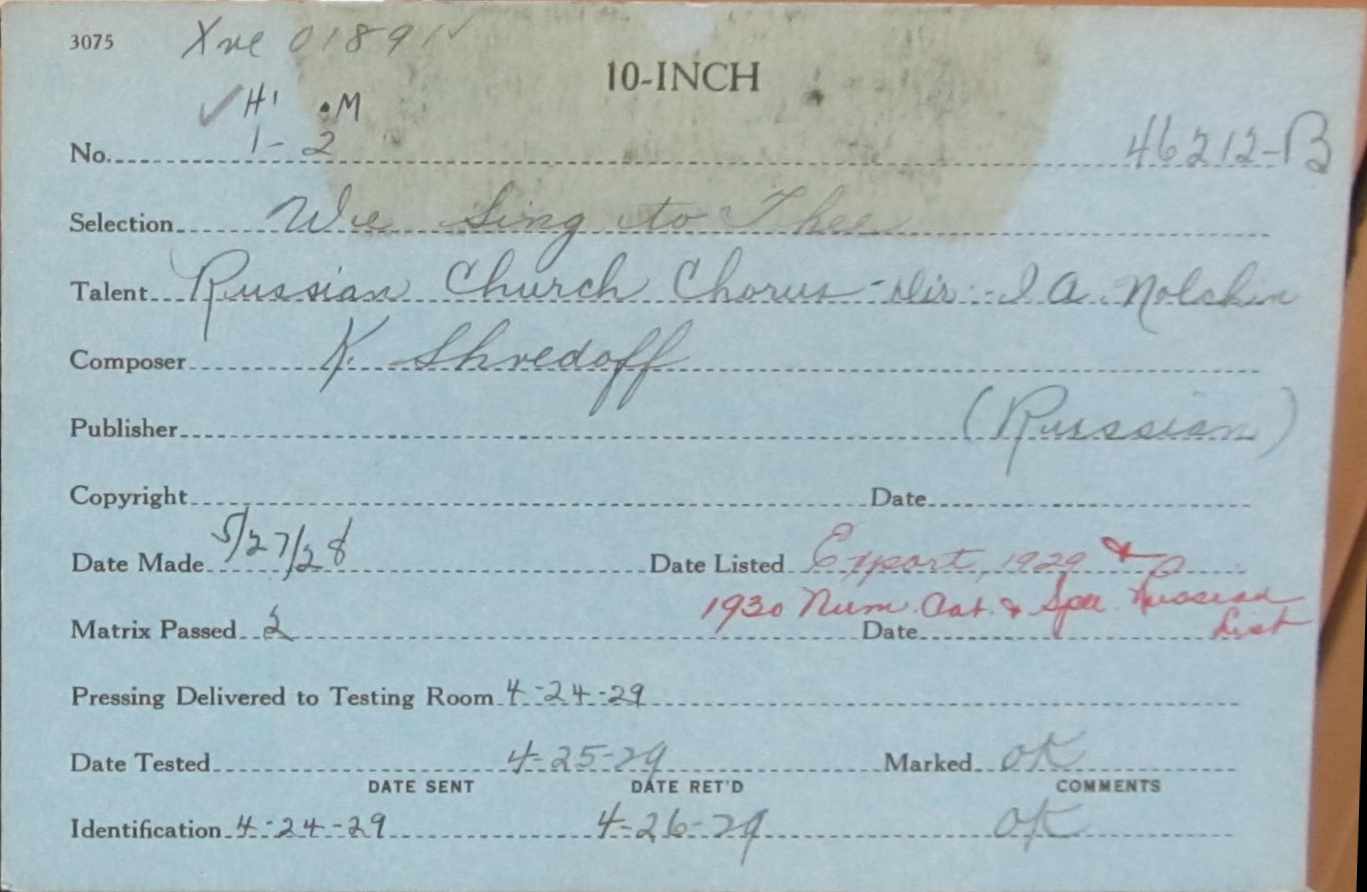 Victor blue history card (BHC) for the B-side of Victor disc 46212. This BHC, reproduced from a digital snapshot taken at the Sony archives, documents one side of a Victor disc that derives from a master believed to have been made in China. Very little documentation of Victor's recording activities in Asia is held in the United States, or possibly anywhere. The card represents the only information available to ADP editors about this 1928 recording. The spelling of the choir director's name on the card as "Nochlin" is an error. Research by an ADP editor has determined that the choir heard on the disc is directed by the notable musician Ivan Andreevich Kolchin. Evidence of seeping of the adhesive used to glue a label sample to the verso of the card may be seen at the top of the card. Image courtesy of Sony Music Entertainment Archives. 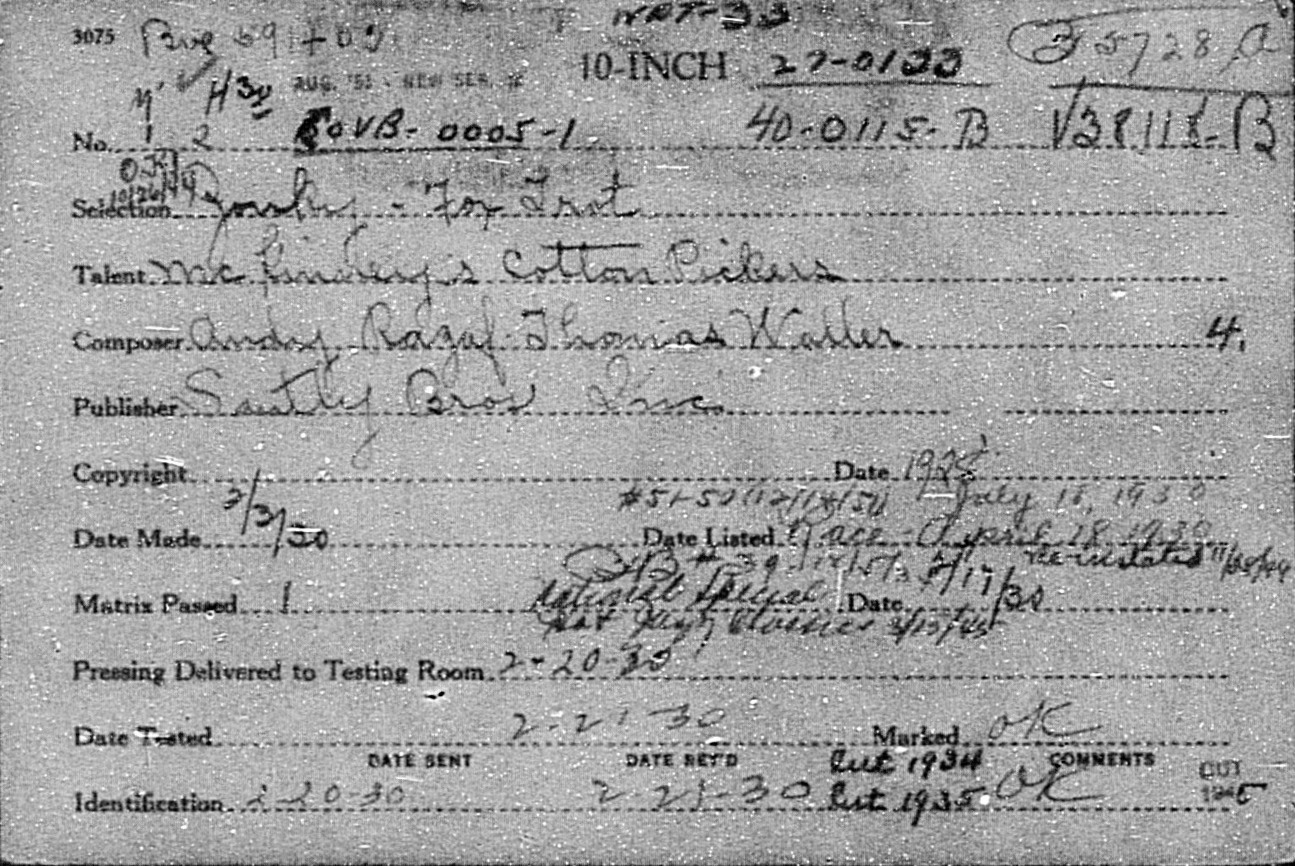 Microfilm image of the BHC for "Zonky," by McKinney's Cotton Pickers. The upper-right-hand corner notations on this blue history card inform ADP editors of the catalog numbers of several of the various issues of take 1 of Victor master BVE-59140, including both Victor and Bluebird 78rpm issues and a 45rpm disc. Image courtesy of Sony Music Entertainment Archives.

Microfilm image of BHC for Victor 20872-A, "Lucky in love." Victor ledgers often note which takes were mastered, but only blue history cards accurately report takes that were actually issued. While very common in Victor's first two decades, issues of more than one take of a master were uncommon by the late 1920s. This card shows that Olsen recorded the work six times and that two of the takes, 3 and 5, were issued. The takes and their dispositions (master, hold, or destroy) may be seen in the upper left of the card.  "A" suffixes to the takes indicate that a second recording lathe was used for the take. Images of Victor labels in the "black label" popular series that were glued to the reverse side of many BHCs are unreadable on the microfilm. Image courtesy of Sony Music Entertainment Archives.

Microfilm imge of BHC for Victor 22298-A. In addition to the issue date and change of publisher's name, this card shows that King Oliver's "St. James Infirmary" was issued on both Bluebird and Victor 78s, and also on Victor Vintage series LP disc LPV-529 (lower left). Bluebird labels attached to BHC cards are very legible on the microfilm copies.

ADP editors use legacy data and the primary resources described here to create descriptions of recordings, edit titles, assign personnel, and verify dates and places of recording. Like most discographies, the DAHR builds on the hard work of others. In addition to augmenting the accomplishments of EDVR founders Fagan and Moran, the Victor section of the discography utilizes many other resources that are regularly consulted for all entries in the DAHR. These include library databases; web and print publications, including sheet music; U.S. Copyright registration records; trade catalogs; and published recordings. Image courtesy of Sony Music Entertainment Archives.

Lazy river-3 (Decca Matrix 117386, take [A] was recorded by The Dukes of Dixieland in New York, New York [unconfirmed])