The transition from the Encyclopedic Discography of Victor Recordings to the Discography of American Historical Recordings (DAHR) is more than a "re-branding." In addition to the new record companies (Columbia and Berliner) added to the discography, we have redesigned the website and added or expanded various features.

Faceted searching has been significantly expanded on the DAHR website to help users home in on masters of particular interest. 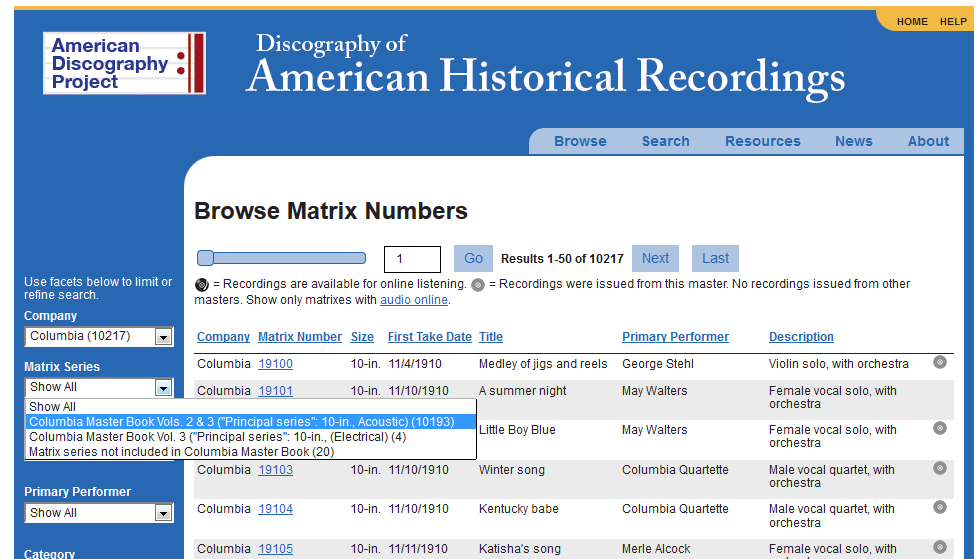 It is very simple to restrict browsing to masters made by one record company. Once a company is selected users have the option of selecting a company's specific matrix series, and sub-series.

It is very easy to browse names in the discography by selecting leading characters of a name at the top of the website page.

Some users are particularly interested in recording field trips made by the record companies, or other special series of masters. Users can search recording locations, such as "Buenos Aires," "Chicago," or even "Camden," in the Basic Search box. The Recording Series facet on the Browse Matrix Numbers page now enables instant listings of Ralph Peer's 1927 Bristol, Tenn. recordings, and other major field trips, and Victor's motion picture soundtracks.

This article is the first in a series of articles on the new features of the Discography of American Historical Recordings.