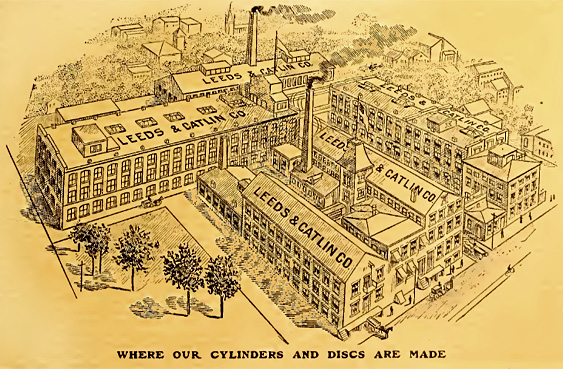 In partnership with Mainspring Press we are pleased to announce the addition of Leeds & Catlin Records to DAHR.

Leeds & Catlin Records may be more noted today for its protracted legal battles than its recordings, but as one of the first independent (albeit patent-pirate) labels making recordings for budget-minded consumers in the early 20th century, it merits further study. Over their short history, they recorded almost 2,900 masters issued on over 5,300 discs on fifteen different labels, both client and in house, which are now documented in DAHR thanks to an agreement with Mainspring Press, the original publisher of Leeds & Catlin Records. A listing of Leeds & Catlin matrix numbers is here and a history of the label is here.

Now viewable in context with the output of both Victor and Columbia, as well as Zonophone and Berliner, the addition of Leeds & Catlin to DAHR sheds further light on the early American recording industry.

Leeds & Catlin is an “artifactual discography,” compiled from examining thousands of pressings as well as extant material like catalogs and advertisements, due to the absence of original company recording documents. As such, it is not complete, and many collectors or archives may have undocumented issues in their collections as well as missing matrix numbers. We welcome the contribution of any missing data at victor@library.ucsb.edu.

For more information on Leeds & Catlin, see the label history originally published in the book.