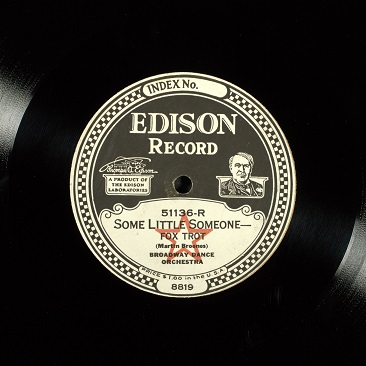 During 1923 and 1924 Edison issued discs with a large red star over the title and artist section of the label. They were officially known as "General Group" records, which were by artists of uncertain popularity. This was to inform dealers that they were not required to stock them as per their agreements with Edison and that if ordered from the factory, unsold stock could not be returned.

How Edison determined what was designated for "General Group" needs further investigation, but clearly some are foreign language, hot dance, or classical selections that may have had a narrower audience than most Edison recordings. Others are new artists that were probably being tested out. But some are artists such as Harvey Hindermeyer, who had been making Edison records for many years, and the reasons for the red star designation are unclear.

How the red star was perceived by the buying public, if at all, in the mid-1920s is subject to speculation, but to a collector today the red star is often a clue that the disc might be unusual, rare, and potentially more interesting than some other Edison Recordings.

Below are some examples of Red Star discs that are digitized and online:

Though there are no complete listings of "Red Star" discs by which to make a detailed analyis of the content, it's always interesting to discover one in a collection and try to imagine why it was given this status.