Violinist Carl Flesch – A Survey of his Edison Recordings 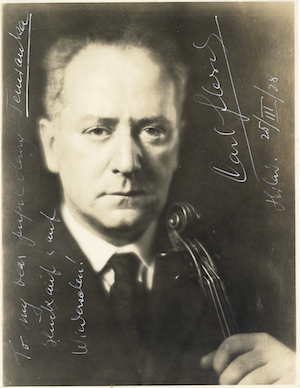 Hungarian violinist Carl Flesch (1873-1944) was one of the most significant violinists who recorded for Edison. Flesch is perhaps best known as a teacher, having taught numerous notable 20th-century violinists, including Henryk Szeryng, Henri Temianka, Roman Totenberg, and others. UCSB’s Henri Temianka Audio Preservation Lab honors Flesch’s student, Henri Temianka. Fittingly, all of UCSB’s Edison Diamond Discs now online were digitized in the state-of-the-art Temianka Lab. The 38 masters[i] Flesch cut for Edison between 1914 and 1928 are especially important because they are his only recordings prior to his recording of the Bach double violin concerto for Columbia Records in 1937 with Joseph Szigeti. Despite his prominent stature as a performer and a teacher, these were his only commercial recordings. Fifteen of his recordings for Edison are now online in DAHR and thirteen more are forthcoming.

Flesch was a noted performer of chamber music, but his Edison recordings are more what one would expect from a violinist of the era recording for Edison: violin showpieces by Wieniawski and Sarasate as well as arrangements of well-known orchestral repertoire by composers such as Dvorak, Schubert, and Tchaikovsky. His last recording session is a bit more interesting, with recordings of Jenö Hubay, Handel, and de Falla, perhaps because Edison’s son Charles had taken over “Artists & Repertoire” responsibilities from his notoriously conservative father.

On his Edison recordings, Flesch played what was known as the 1725 "Brancaccio Strad" (made by the famed luthier Antonio Stradivari), which he had to sell in the late 1920s because of financial hardship. The violin was later destroyed during an Allied air raid on Berlin during WWII. Flesch’s recordings for Edison are the only recordings of this instrument.

From these 38 masters, 18 Diamond Discs, one “needle type” lateral recording, and one Edison Long Playing Record were issued, stemming from recording sessions made in 1914 and during 1924-1928. Edison nearly always recorded and issued multiple takes of each selection, so discs turn up with various pairings of takes A, B, and C (or higher) on the two sides. The pairing combinations can be numerous. As part of this project, all takes of classical recordings in UCSB’s collection were digitized to promote study of these recordings and help scholars determine how much the takes might have varied in interpretation. In some cases, such as Fritz Kreisler’s arrangement of Mendelssohn’s Lied ohne Worte, all three takes have been digitized and are available online.

The records from the middle time period are the most common, as very early and very late records (which the 1914 and 1928 sessions are, respectively) are more difficult to find. Fourteen recordings from the “Curtis era sessions” are available for online listening, as is one from the 1914 session. In the lower registers, the tone of the Brancaccio Stradivarius he was playing at the time is rich and dark; in the higher registers, it is light and ethereal. Hearing the recordings of a violin virtuoso is interesting on many levels, in addition to just the music. Hearing the sound of Flesch’s famous but lost Strad, hearing a peer of the top violinists who recorded for Victor yet with the different sound of Edison’s recording technology, and hearing the teacher of so many of the 20th century’s great violinists—all these aspects add to our appreciation of his recordings.

In 1929 Flesch returned to Europe to teach in Berlin, and he did not record again until the 1937 Columbia session. He remained in Europe until his death in 1944 in Switzerland.

Flesh's recordings for Edison are documented in the DAHR database here. Further information on the individual sessions can be found below.

Flesch was living in Europe at the time and it isn’t clear what brought Flesch to Edison’s studios to record. Flesch’s first recording session in April 1914 resulted in seven recordings, including works by Vieuxtemps, Wieniawski, Chopin, and Schubert. Five of the seven recordings were issued on three discs in the classical series 82063, 82072, and 82094. On 82063, Flesch performed Schubert’s Ave Maria on one side, while on the reverse side was an explanatory talk by Harry Humphreys--a common feature of Edison’s early classical recordings. Ave Maria was again recorded during the 1924 sessions.

Flesch’s most prolific period of recording for Edison was the period from 1924 through 1928, when he recorded a total of 21 sides during the time that he was teaching at the Curtis Institute of Music in Philadelphia, just a short train ride from Edison’s studios in New York. Perhaps because of his earlier relationship with Edison, he was brought back to the studios to record because he was living and working nearby.

He did two groups of recordings in 1924, in January and April. On January 29-30, eight recordings were made, of which six were issued. With Waldemar Liachowsky on piano, he recorded more standard repertoire, including Dvorak, Sarasate, Mendelssohn, and Titl. In his April session with Harry Kaufman on the piano, he made two new recordings, re-recorded two selections from the January sessions that were rejected, and made a new take (with a different master number) of Schubert’s Ave Maria. From the January sessions, discs 82311, 82313, 82321, 82327, and 82330 were issued. The new take of Ave Maria was substituted on the old 1914 issue of 82063, which seemed to have remained in print (or more likely came back into print).

Flesch returned to New York twice in 1926 to record ten more recordings in February and March with Kurt Ruhrseitz, an assistant conductor at the Metropolitan Opera, on the piano. Repertoire included Grieg, Kreisler arrangements, Wienawski, Smetana, Rubinstein, and Tchaikovsky. All ten recordings from these sessions were issued on five discs: 82346, 82348, 82349, and his first two issues in the “light classical” 80000 series, 80865 and 80878. Disc 80878 was planned to be issued in the more “serious” 82000 classical series as 82350, but that did not occur.

For his March 1928 recording session, Flesch made ten electrical recordings in both vertical and lateral (“needle type”) formats, all with Raymond Bauman at the piano. “Needle type” discs were Edison’s answer to the dominance of the lateral recordings that every other company by this point was selling, but they were only issued briefly before the shuttering of the company in October 1929. Repertoire included three pieces by Handel, two by de Falla, and works by Lehar, Antonio Lotti, and Alexander Krakauer. All ten were issued on rare, late electrical Diamond Discs on numbers in the 80000 series: 80889, 80893, 80894, 80897, and 80902. Only one needle type disc was issued, number 47001 with Henri Vieuxtemps’s Reverie and Jenö Hubay’s Hejre kati. (Although none of the 1928 recordings are presently online, they will be in the near future.)

Finally, ten of Flesch’s recordings were dubbed to Edison’s experimental long-playing format and were issued as LP 30006, the last of Edison’s LP issues. Edison must have had great respect for Flesch to issue a whole LP of his playing, the other LPs in this series being mostly a potpourri of various light entertainment. Because Edison LPs needed to be played on specialized equipment and were easily damaged, they are very rare today, and this disc is the most desirable of all Edison’s LPs.

[i] There are 48 masters if you count the duplicative needle-type masters recorded simultaneously on different equipment.