From its beginnings in the late 1880s through the end of the 1920s, perhaps the greatest downside of listening to recorded music was the limited playing time of the record. The earliest cylinders and 7” discs played for a mere two minutes, and over the next quarter-century finer cylinder grooves and larger discs extended that time to four or five minutes. However, getting up to change a record every five minutes was still a significant distraction to those who simply wished to relax for a half-hour and listen to some music. 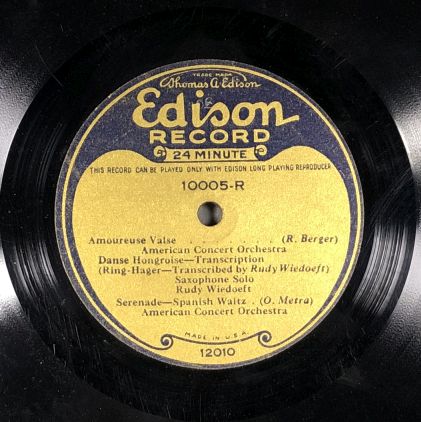 In October 1926, Thomas A. Edison Inc. addressed this issue with the introduction of their new Long-Playing Record and phonographs. The extended playing time was achieved not by slowing the revolution speed of the turntable but by tripling the grooves per inch from 150 to an astonishing 450! This resulted in a playing time of 12 minutes per side on a 10” disc and 20 minutes per side on a new 12” disc. On a two-sided 12” record, this yielded a total playing time of 40 minutes and a total groove length of a mile and a quarter!

In order to accomplish this, new phonograph gearing was needed to move the tonearm and stylus assembly at a far slower speed and a new reproducer with a lighter weight and a much smaller diamond tip (polished to only .002” wide and .0035” long) was needed to fit the new narrower groove. Four new console-style phonographs, simply numbered Console 1 through 4, were introduced. Finished in Trafalgar brown mahogany and ranging in price from $165 to $300, they featured a gear switch to reduce the tracking speed of the tonearm and a Long Play reproducer as well as the standard reproducer. A gear reduction set that could be retrofitted to earlier models was also offered.

Edison advertising boasted that the new records could entertain a dinner party “from Soup to Nuts,” implying that a single record could last from the appetizer through the dessert. And of course, when calculated on a cost per minute of music, the new Edison Long Playing Record reduced that cost by half. Edison copywriters were effusive in their praise for the new format, promising “long, uninterrupted programs of the world’s best music rendered in the pure and undistorted manner for which the New Edison is noted.”  Unfortunately, the reality did not quite live up to the promises.

Instead of long, uninterrupted symphonies, the Edison LPs were largely made up of dubs from existing acoustic recordings and fell into the category of background dinner music. Their volume was significantly reduced from the regular Edison records and the tone was best described as “thin.” The records were quite fragile, and a stylus lowered onto the record at any point other than the lead-in area could easily damage the groove, which was finer than a human hair. Tiny scratches could cause repeating, and any moisture or other mishandling would render the record noisy or, at worst, unplayable.

Only eight 10” selections (10001-10008) and six 12” selections 30001-30006) were ever issued. Nearly all were orchestral, operatic, or concert pieces played by small salon ensembles. Had electrical recording been employed, or directly recorded symphonies been made, perhaps the results might have been different. As it was though, the Edison LP, while far in advance of its time, was a commercial failure.

Today, a top condition record with a good reproducer can provide the listener with up to 20 minutes of uninterrupted music. While certainly on the mellow side, it is quite relaxing and enjoyable.

-Michael Sherman, Monarch Records Enterprises (Michael is the author of the reference work The Collector's Guide to Edison Disc Recordings.)

Links to digitized copies of Edison Long Playing Records will be available online in the near future.