Edison matrix numbers ran sequentially from 100, starting with experimental disc recordings in 1910 through 19349 in September 1929. For the most part, a lower number is an earlier recording, with a couple of exceptions. The matrix and take numbers are almost always visible on the disc and/or label, making for easy identification of the exact recording even if the label has fallen off. (Edison paper labels were not affixed to the record during pressing as the heat turned them brown, so they were affixed after pressing.) DAHR can be searched by matrix number to assist in identifying the exact recording on a particular disc.

On the earliest pressings, known as the “preliminary couplings,” the matrix is in mirror writing immediately below the shield style label:

In the middle of 1913, with the switch from the preliminary couplings to the permanent couplings, the matrix number begins appearing in the run-out area below the label in right-reading type: 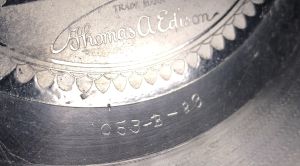 Later pressings often have a spot for the matrix number in the bands around the label or in a box at the bottom of the paper label, or both. 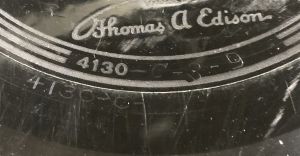 This display of the matrix number at the bottom of the label and/or in the dead wax immediately below 6 o'clock on the label was maintained until the end of Diamond Disc production.

Following the matrix number, there is typically a hyphen and then a letter, usually A, B, or C, but sometimes a higher letter. In the second two images above, the letters B and C are visible after the matrix numbers. The letters are the takes. Edison almost always recorded three takes, and unlike most other companies during this era Edison typically manufactured and sold all three recorded takes. The numbers following the take letter are mold and stamper numbers and are relevant for the manufacturing process but do not differentiate different recordings.

In cases where the first takes were rejected or an artist came back to the studio to re-record a selection, one may find a second set of three takes, typically takes F, G, and H, or, more rarely, J, K, and L. Issued O takes (the letter "O," not zero) from an M, N, O trio of takes exist, and takes as high as P are known (matrixes 4733 and 4734, e.g.). Higher takes exist on masters used for Edison LP issues, perhaps because it was so difficult to do the dubbing from the original matrixes to the 450 TPI LP matrix without problems.

Very early take numbers on matrixes below 2662 are listed as S-1 and S-2 in internal Edison documentation, rather than A and B. DAHR has retained this, though other discographical sources use A and B. Assume that S-1=A when comparing different discographic sources on Edison. Why this practice was used and why the switch occurred is not known (to us).

Edison Needle Type masters prefaced the matrix with an N and retained the A, B, C takes. This is covered in greater depth in the essay on Needle Type discs.

During the digitization of UCSB’s Edison discs, for efficiency we digitized multiple takes of classical, jazz, popular, and country recordings. It may be of research interest to eventually digitize all alternate takes, but that was not possible for this project.