In 1921, Thomas A. Edison, Inc. took a rather novel approach toward selling their Diamond Discs with the publication of a 32-page booklet entitled “Mood Music” in which the psychological effects of music were examined and selections made from the vast Edison catalog. These selections were made based on psychological experiments conducted under the direction of Dr. W.V. Bingham, Director of the Department of Applied Psychology at the Carnegie Institute of Technology.  The listings were not grouped into the conventional categories normally found in record catalogs (such as Band Music, Operatic Gems etc…) but rather from the viewpoint of what the music would do for you.

The booklet began by asking “Has it occurred to you that music might be made to bring more than pleasure? That its mysterious compelling power might be utilized to do you much practical good?” After offering several examples of historical figures who sought, and achieved, comfort in music, Mr. Edison’s comments followed. “Music,” he told an interviewer, “is capable of releasing in every mind thoughts which literature evokes in only the most erudite minds. Next to religion, it is man’s greatest solace, and is also his greatest inspiration. What I want to see in every American home is music, so realistic, and so perfect in its rendition, as to be an underlying source of benefit and pleasure.”

Beginning with approximately 590 Edison discs, Dr. Bingham conducted extensive listening tests over a period of many months. While some recordings produced different reactions from different people, others were very consistent in their effects and it was from this group that Dr. Bingham and his staff finally chose some 135 selections that were then grouped into 12 categories as follows:

Approximately 10 to 15 recordings were suggested under each category, complete with the record number and price. For some categories, an illustration accompanied the list to underscore the curative powers of the music. Not surprisingly, a good number of the listed recordings were from the semi-classical 80000 series and the classical/operatic 82000 series. Most of the popular 50000 series recordings were found under the “Jolly Moods,” “More Energy,” “Stirring,” and “Children’s” categories. Virtually all the others were made up from the more expensive lines. 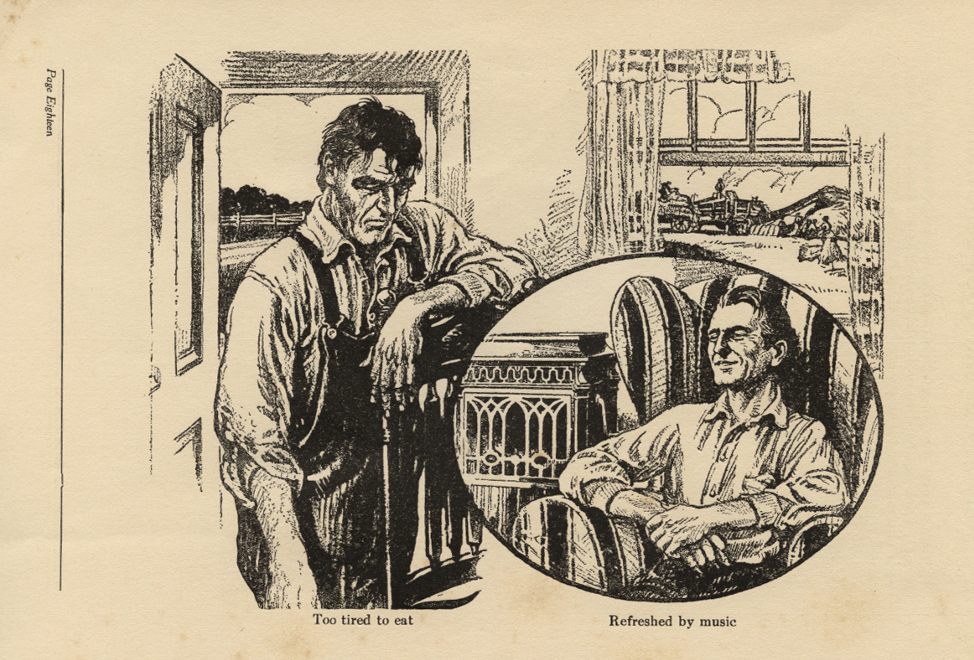 The booklet concluded with an essay from Dr. Bingham detailing his methodology and conclusions. He noted that “Each one of these selections had proved that it exerted a marked and definite effect. Each had proved that this effect was much the same upon numerous different normal listeners. There were the Re-Creations which could be depended upon to produce desired Mood Changes, and, as such, they were set aside, classified and arranged in lists, according to the moods which they produced.”

A copy of the Mood Change Chart (offered free) appeared on the last page, allowing listeners to document changes in their own mood from listening to specific Edison records. 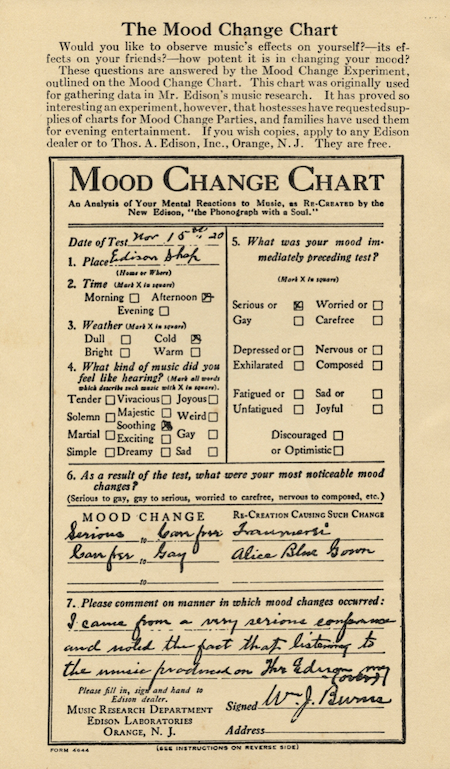 -Michael Sherman, Monarch Records Enterprises (Michael is the author of the reference work The Collector's Guide to Edison Disc Recordings.)

Links to digitized copies of Edison Mood Music programs will be available online in the near future.