Columbia and Berliner Takes and Issues

Special care should be taken in interpreting Columbia and Berliner take and issue information in the Discography of American Historical Recordings (DAHR).

The Discography of American Historical Recordings has been created from a number of pre-existing projects and publications. Its foundation is the Encyclopedic Discography of Victor Recordings (EDVR), a project started in the early 1960s by Ted Fagan and William R. Moran. Documentation of Victor recordings in the DAHR is based on research conducted by Fagan, Moran, and other collectors, and copies of original Victor documents made available to American Discography Project (ADP) editors. Examples of many of the Victor resources available to the ADP may be found at Resources Consulted to Edit Victor Masters.

The following provides a brief overview of some of the resources used to compile the print discographies that form the basis of DAHR Columbia and Berliner entries, and also serves to alert users to sections of the discography that may be less than authoritative.

The main listings of 10-in. Columbia masters in the DAHR derive from volumes two and three of The Columbia Master Book Discography. These volumes were compiled by Brian Rust (1922-2011). Mr. Rust states in his preface to volume two of The Columbia Master Book Discography that he was provided by CBS Records with a set of microfilm of the artist and matrix cards created by the company and held now in the Sony Music Entertainment archives in New York City. He also consulted typewritten matrix lists compiled more than 50 years ago by CBS Records employee, Helene F. Churma. 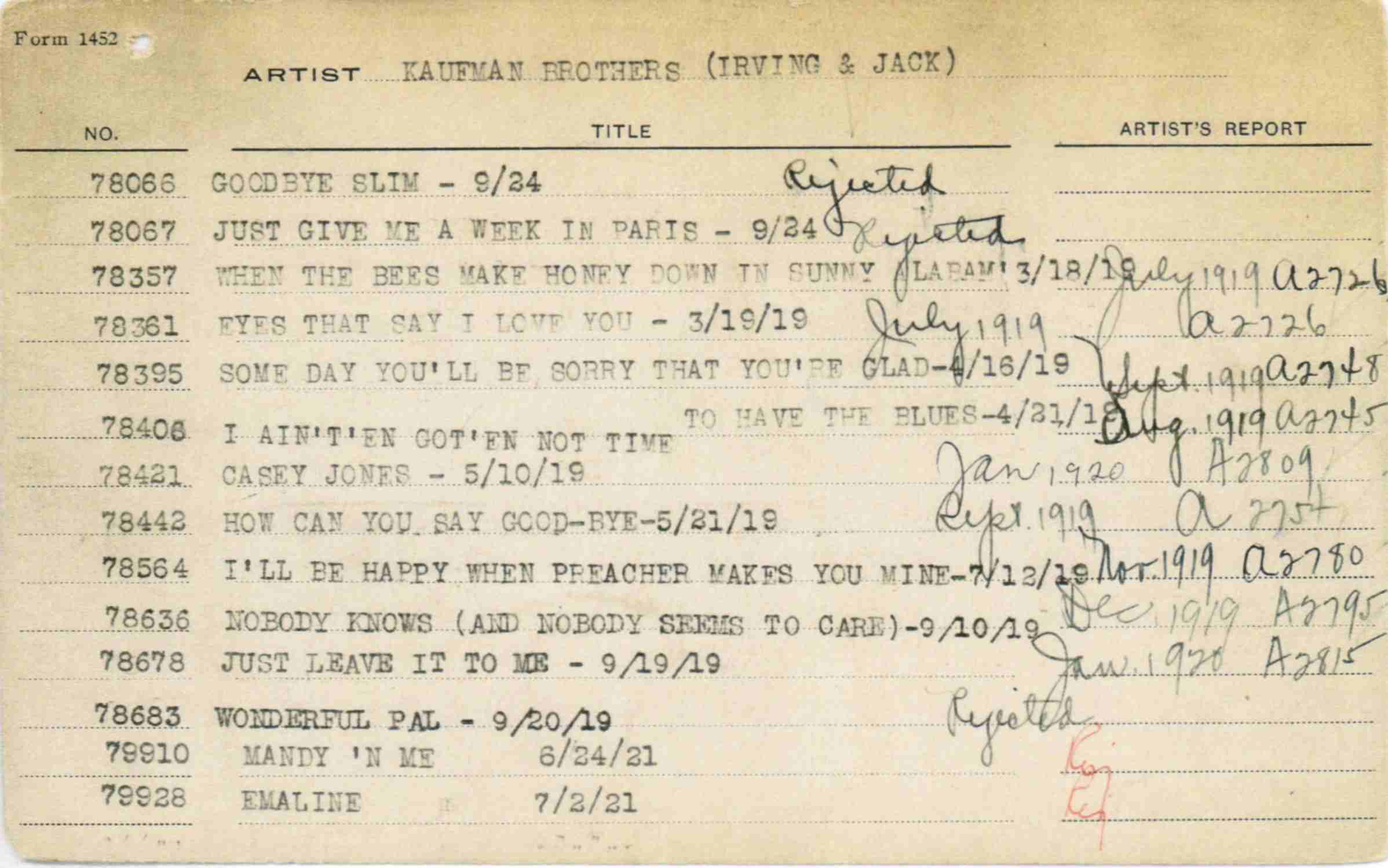 This Columbia artist card documents recordings made by vocalists Jack and Irving Kaufman between September 1918 and July 1921. It includes recording dates and outcome of each set of masters ("Rejected" or a Columbia issue number). The card does not designate the exact take(s) used for each release. Image courtesy of Sony Music Entertainment Archives. 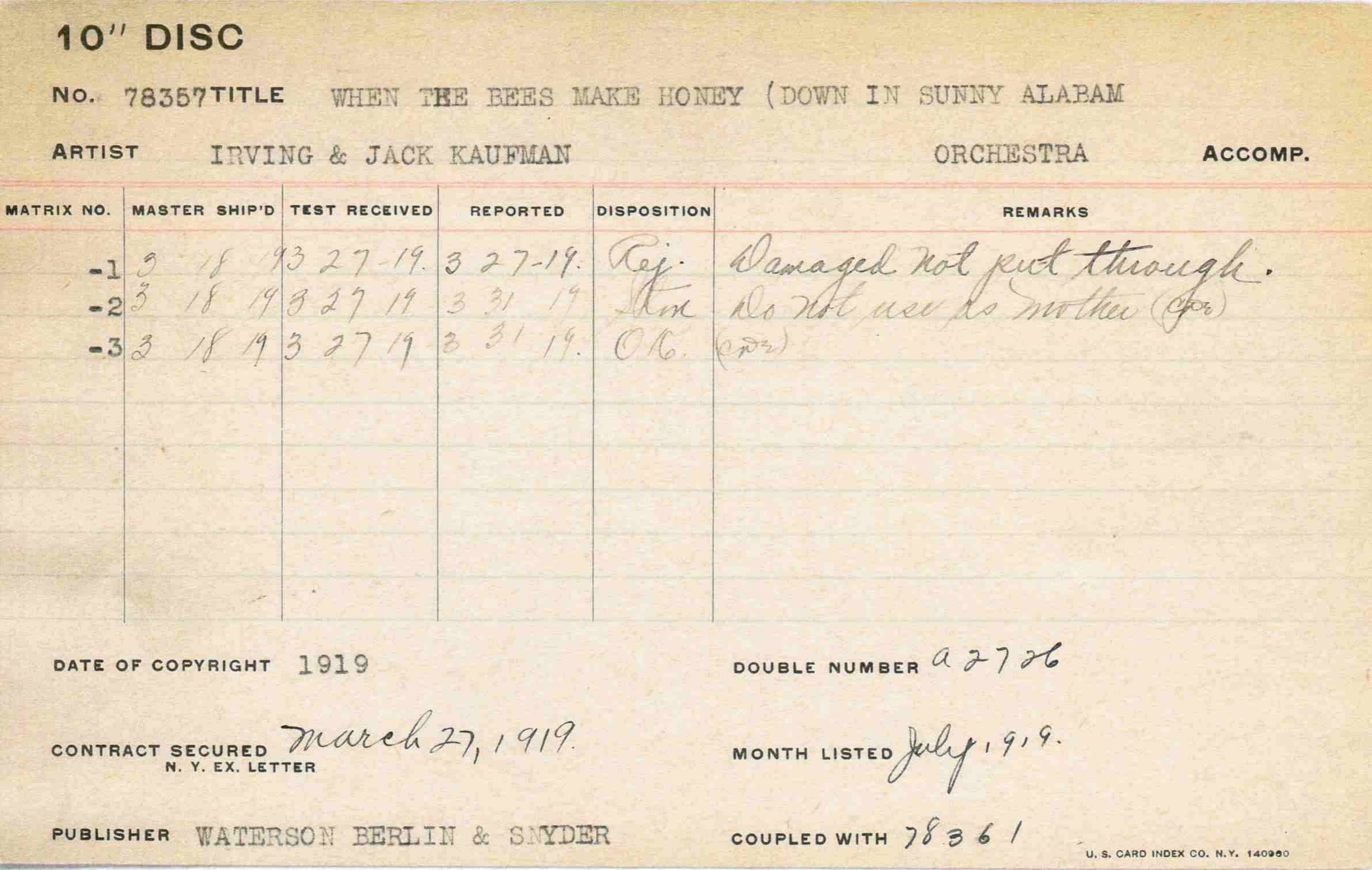 This matrix card for Columbia master 78357 notes that three takes were made and that only the disposition of take 3 is "O.K." These cards do not list the date of the recordings, but they do include the dates that master discs were sent to the laboratory for plating and processing ("Master Ship'd"), and the date a test pressing was received. The "Master Ship'd" date is the date often listed in The Columbia Master Book Discography and it is used in the Take Date area of DAHR entries. Image courtesy of Sony Music Entertainment Archives. 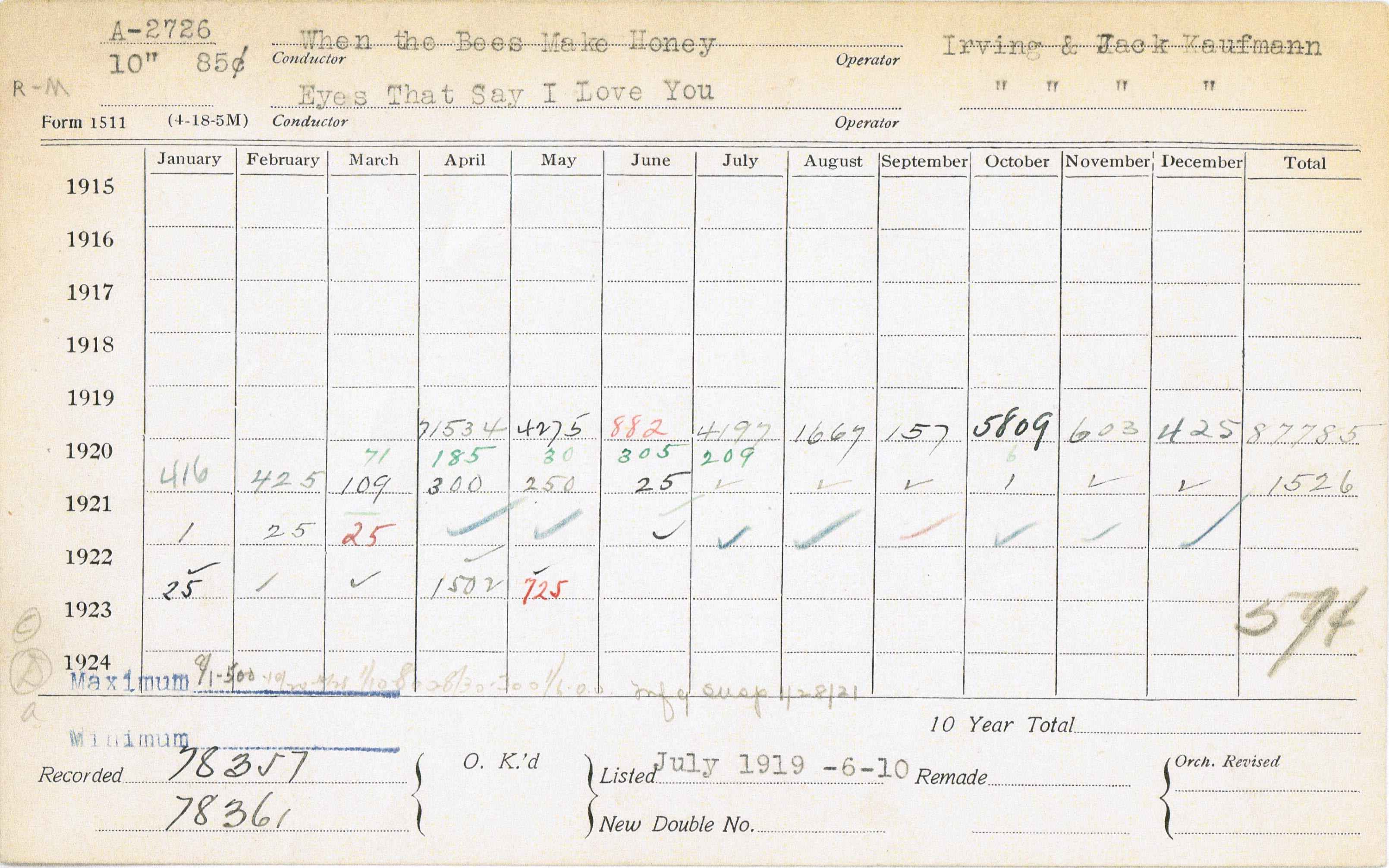 The Kaufman Brothers' Columbia recording "Eyes that say 'I love you'" was issued as Columbia A2726. The handwritten figures found on Columbia issue cards are believed to be the number of discs shipped to dealers each month (not those actually sold). The figures in red may represent the number of returns in a month, or negative net totals.

Mr. Rust's primary source in compiling volumes two and three of the Columbia discography was copies of the matrix cards on reels of microfilm. Columbia artist cards were consulted by him, as well, but upon comparison of a few of the original cards held in the Sony Music Entertainment archives and entries in the two volumes of The Columbia Master Book Discography edited by Mr. Rust, actual recording dates found on many of the cards are not included in the print volumes. In instances where ADP editors have determined actual recording dates, from editors' examination of Columbia artist cards or from other sources, and the dates differ from those found in the print volumes, the DAHR matrix record will include a footnote.

Because of the incomplete information on the matrix cards, DAHR users must keep in mind that actual take dates of Columbia 10-in. discs recorded prior to the end of 1922 are often a day or two before the take date cited in the DAHR. The date cited in Mr. Rust's volumes and in the DAHR for these recordings is usually the date the master was shipped to the laboratory. Image courtesy of Sony Music Entertainment Archives.

In volume two of The Columbia Master Book Discography, Al Jolson's recording of "I've got my captain working for me now" is noted as having been recorded on September 15, 1919. This is the date that the Columbia matrix card (right) cites as the date the master was shipped to the laboratory. However, Al Jolson's artist card (left) lists the recording date as September 14, 1919. Because ADP editors have had access to only a small handful of original Columbia documents, the DAHR necessarily includes a number of recording date discrepancies such as this. Images courtesy of Sony Music Entertainment Archives.

The excerpt above from a Columbia master card illustrates an uncertainty found within some of the DAHR Columbia matrix records recorded from 1910 on: there are a few cases where a take that a Columbia card designates as "O.K.," or mastered, is marked in the Rust volumes and in the DAHR as resulting in an issued disc, but the information is not confirmed. We believe that The Columbia Master Book Discography, upon which DAHR entries are based, lists all 10-in. "O.K." takes as having been issued. ADP editors question this conclusion in some instances, but unless noted otherwise in the matrix record, the DAHR record reflects take status and issues as found in the Columbia discography print volumes. Image courtesy of Sony Music Entertainment Archives.

In many cases, ADP editors have found entries in specialized discographies, even those compiled by Brian Rust (who is responsible for the 10-in listings in The Columbia Master Book Discography), that do not list as some takes as issued but noted as so in volumes two and three of the Columbia print discography. For example, The Columbia Master Book Discography notes that both takes 1 and 2 of Columbia master 77740, "Regretful blues," by Wilbur Sweatman's Original Jazz Band, were issued as Columbia disc A2548. Brian Rust's Jazz and Ragtime Records 1897-1942 (Mainspring Press, 2002) notes only take 2 as issued. Tim Brooks has pointed out to the DAHR editors that the discography included in Mark Berresford's biography of Sweatman, "probably the most thoroughly researched discography of this artist," does list an issue of A2548 from take 1. Similar discrepancies may be found between the Columbia print discography listings and those of Tony Russell's Country Music Records: A Discography, 1921-1942 (Oxford Press, 2004). For example, the Columbia discography implies that both takes 1 and 2 of master 140016, Riley Puckett's "Jesse James," were issued as Columbia disc 15033-D; Russell's discography lists only take 1 as having been issued.

To summarize: DAHR users should keep in mind that it is possible that some takes listed in Rust's volumes as issued, and designated as so in the DAHR, may not have been.

Berliner documentation in the DAHR derives primarily from observation of actual discs and transcription of information found in Berliner trade catalogs. No original Berliner Company documentation about the exact content of Berliner disc issues is known to exist other than trade catalogs that list release numbers, selection titles, and performers.

Paul Charosh's discography of U.S. Berliner discs, upon which the Berliner section of the DAHR is based, was compiled by examination of every known Berliner trade catalog, citations from personal correspondence of Emile Berliner, personal examination of Berliner discs, and descriptions of discs held in public and private collections. Mr. Charosh's research has been supplemented in a number of ways by American Discography Project (ADP) editors. Collector and historian David Giovannoni generously shared images of discs in his possession with the editors; information from these discs, often not found in the edition of Mr. Charosh's book that has been licensed by the ADP, has been included in the online discography. ADP editors have also been able to draw preliminary conclusions on recording date ranges and places of recording on the basis of examination of discs and disc images.

As seen in this Takes section of the DAHR entry for Berliner 15, six separate recordings bearing this issue number are known to have been issued. The "DEx" found at the end of the Note on five of the takes indicates that these actual issues have been seen by someone. Identification of the first issue listed, marked as an unknown take, derives from examination of a Berliner trade catalog by Paul Charosh (designated as "PCDoc" at the end of the Note). ADP editors have dated that first take as "Before 1895" because documentation of the release was found in a Berliner catalog dated January 1895.

Berliner is known is have recorded in only three U.S. cities: Washington, New York, and Philadelphia. The last sessions known to have taken place in Washington were in April 1898. When no location indications have been found on a disc, DAHR listings name each possible city in which a recording might have been made, as in the first two takes listed in this example.

The recording date of October 1897 and New York designation on take X derive from an inscription on a disc copy, as do the details provided for the take W release. The source of the assignment of the role of conductor of the Sousa Band to Henry Higgins is James R. Smart's Sousa Band discography.

The discs from takes ZZ and YY were also examined. Only take YY is confirmed as as recorded in New York City and neither bears a recording date. Here, ADP editors drew some tentative conclusions on the basis of known information about other Banda Rossa performances for Berliner. New York City is the take placed marked on every Berliner disc by the Banda Rossa that shows a place of recording, thus the designation of New York City as the location of take ZZ, and the qualification, "unconfirmed."

The recording date range assigned to takes YY and ZZ is based on knowledge we have about Berliner issue and take "numbering" order practices. As Mr. Charosh explains in the User's Guide to his book, takes of discs made before April 1899 were often marked by letters, the first take bearing no letter, followed by Z, Y, X, W, and V, and—occasionally—added YY and ZZ takes. ADP editors speculate that takes YY and ZZ were made sometime between February 1898 and March 1899. The beginning date is the month the W take was recorded; the end date provided is the last month U.S. Berliner discs were made with letter-designated takes. The estimates made by the ADP editors are not absolutely definitive but are believed to be very reliable as general guides. Users will find in the Source(s) section of each Berliner matrix record notes on the occurrences and basis of any speculation added to the discography entry.

Given what we know about the Berliner take identification system in use at the time these versions of "Loin du bal" were recorded, it is possible that a Z take and a V take were made, and that new issues of Berliner 15 exist somewhere, awaiting discovery.

Finally, users should be aware that after letter take designations were dropped in March of 1899, Berliner takes were marked with typographic marks such as "+," "≠," "†," and "#." It is not known which take each symbol represents. However, take entries for discs of this era, 1899-1900, note when one of these symbols has been observed.

I found a love (Decca Matrix L 16080, take [A] was recorded by Ratchell in Los Angeles, California)