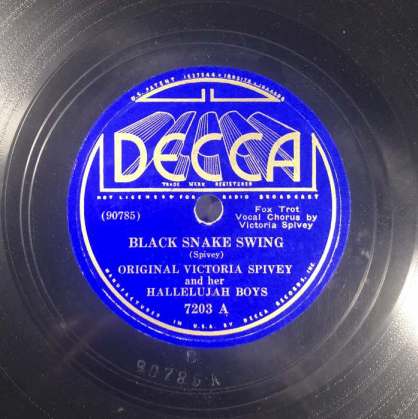 DAHR users may have noticed the addition of Decca Records masters to the discography. Documentation of more than 48,000 masters is already listed. The Decca entries are an adaptation of Michel Ruppli's six-volume Decca labels discography, published in 1996 by Greenwood Press, now ABC-CLIO. Online rights to the work have been licensed from ABC/CLIO by the American Discography Project.

The source and format of our Decca presentation differs from that of the other labels included in the DAHR. The ADP arranged for the Decca volumes to be keyed into a database. The information provided on Decca has been added the DAHR almost exactly as found in Michel Ruppli's discography, with minimal revision by ADP editors. Users familiar with print discographies will recognize conventions common to print works within our entries.

As you make use of Decca information provided here, please keep in mind a few things. The load is in progress. Thousands of additional masters will be placed online in coming days. Some minor organizational revisions are in the works and some refinement of the entries will be made by ADP editors in coming months. Please keep in mind, too, that many of the dates provided in documentation of post-78-rpm period masters may not be the exact dates of recording, but instead mastering, or other, dates. Most take numbers are not included in Mr. Ruppli's data. We've learned from recording historian Steven Lasker that Decca usually identified the take issued take as "A," regardless of its order at the recording session. More on all this once we complete the conversion and present Mr. Ruppli's entire work.